Taiyuan University of Science and Technology 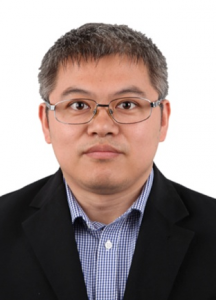 (This tutorial will be given in Chinese)

Biography: Weigang Chen is a Distinguished Associate Professor, supervisor of Ph.D candidates in School of Microelectronics, Tianjin University. He received the B.E. degree from Shandong University in 2003 and Ph.D. degree from Tsinghua University in 2008, respectively. From September 2008 to September 2009, he was a postdoc research fellow with ETIS (CNRS UMR 8051), Cergy, France. From October 2014 to September 2015, he was a visiting research fellow with UCLA, California, USA. In 2012, he was awarded by the Program for New Century Excellent Talents in University (NCET-12-0401) from Ministry of Education in China. His current research interest includes information theory and coding, DNA data storage, wireless communications, and maritime communication networks. etc.

Abstract: The mention as a topic in the Mathematics Subjects Classification 2020 by Mathematical Reviews and zbMATH is a sign of maturity of membrane computing. This talk presents the state of the art of membrane computing research through bibliometric analysis across twenty years. On the basis of more than twenty widely used databases, the analysis is made by considering landmarking successes, milestone events, international flagship conferences/workshops, special issues of international journals, doctoral theses, funds, author distribution, authorship, co-authorship, countries, citation and co-citation. Underlying the analysis, the ground-breaking research topics, the most influential authors/countries and the most vigorous research lines are revealed.

Biography: Gexiang Zhang received his Ph.D. degree in 2005 from Southwest Jiaotong University, Chengdu, China. Now he is a full professor at School of Control Engineering, Chengdu University of Information Technology, Chengdu, China. He was a (senior) visiting professor at The University of Sheffield, UK, Universidad de Sevilla, Spain, and New York University, USA. He is the President of International Membrane Computing Society (IMCS), a Fellow of the IET, Senior Member of the IEEE. Managing Editor of Journal of Membrane Computing and editorial board member of IJPEDS. He is the co-winner of Grigore Moisil Prize of the Romanian Academy in 2019. He is listed in World’s Top 2% Scientists in 2020 and in Highly Cited Chinese Researchers by Elsevier in 2021. Research areas include membrane computing, evolutionary computation and neural network. He is the author/co-author of more than 200 publications, three monographs, and (lead) guest editor/co-editor of more than 10 volumes/proceedings. Speaker: Cheng He, Southern University of Science and Technology

Abstract: Large-scale multiobjective optimization problems (LSMOPs) are widely existed in real-world applications, which has proposed great challenge for existing evolutionary algorithms (EAs). In this tutorial, we first introduce a benchmark LSMOP test suite exacted from the power delivery system. Then we survey some representative EAs for large-scale multiobjective optimization. Afterwards, some of recent our work on handling LSMOPs from four aspects, i.e., problem reformulation, efficient offspring generation, constraint handling, and dealing with expensive objective functions, are explicated. Eventually, some open questions are mentioned.

Biography: Cheng He is currently a Research Assistant Professor with the Department of Computer Science and Engineering, Southern University of Science and Technology, Shenzhen, China. Dr. He has published over 30 high-quality papers on different journals, including IEEE TEVC, IEEE TCYB, IEEE TSMCS, IEEE TNNLS, etc. He is the leading Guest Editor for “Special Issue: Emerging Topics in Evolutionary Multiobjective Optimization” of the Complex and Intelligent Systems. His research interests include model-based evolutionary algorithms, multiobjective optimization, large-scale optimization, deep learning, and their applications.

Abstract: Spiking neural (SN) P systems are a class of spiking neural networks within the framework of membrane computing, inspired from the way biological neurons cooperate by means of sending to each other electrical impulses (spikes) of identical shape (with the frequency, the distance between consecutive spikes, encoding the information). The SN P system was introduced in 2006, and this model has already been investigated in a large number of papers, from many points of view, from theory to applications. The tutorial briefly presents the biological background of the SN P system and the relationship between SN P systems and artificial neural networks, and spends more time on reviewing basic (types of) results of the model and ideas of modifying the initial definition in order to get new classes of SN P systems.

Biography: Tingfang Wu received the Ph.D. degree in control science and engineering from Huazhong University of Science and Technology, Wuhan, China, in 2018. He is currently an Associate Professor with the College of Computer Science and Technology, Soochow University, Suzhou, China. He is an awardee of the Program of Entrepreneurship and Innovation Doctors in Jiangsu Province and the Excellent Young Scholar of Soochow University. He has published over 30 scientific papers in international journals or conferences, and his current research interests include membrane computing and computational complexity theory.